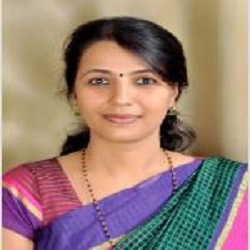 Dr. Geetha, N., Associate Professor in Biotechnology, University of Mysore has obtained her M.Sc. in Microbiology in 1995, achieving the distinction of First Rank and was awarded a Gold Medal for her accomplishment. She received her M.Phil. in Seed Technology in 1996 with distinction. She obtained her Ph.D. degree in Biotechnology from the University of Mysore, India in 2003 under the guidance of Prof. H. Shekar Shetty. Amongst the awards she has received for her scientific contributions, the notable ones are the ISCA- Young Scientist Award-2002; Smt. Guman Verma Memorial Best Woman Scientist Award-2002; Sri. P.P. Singhal Memorial Pesticide India Award-2004; Prof. Biligrami Best Paper of the Global Conference-2006. Prior to taking on the role of Assistant Professor, she was awarded fellowships – Senior Research Fellow, Research Associate and Post Doctoral Fellow from national and international funding agencies like ICAR, CSIR, DST, and DANIDA-ENRECA. Being associated with research programmes, she has been successful in securing externally funded projects like UGC-UOM project, UGC-Major Research Project and SERBFast Track programme for Young Scientists.

Dr. Geetha has so far successfully guided ten M. Phil. students through their dissertation and twenty-nine Masters Projects. She has currently four Ph.D candidates carrying out research under her supervision and five students were awarded the Ph.D. degree from 2016 to 2019. She has published 52 Research papers in peer-reviewed national and international journals and has two book chapters to her credit. In addition to her academic excellence, she has excelled in the field of performing arts. She was awarded the Master of Arts in Bharatanatyam (Vidwath), a classical Indian dance form in 1991. She has given numerous dance performances at the State and National levels. Dr. Geetha has been the cultural co-ordinator at the University of Mysore and leads the Team of the University of Mysore at various national and international cultural festivals. She is also actively involved in conducting student-counseling programs to create Psychosocial and Mental well-being amongst students.